Well, I found another novella by Piper & McGuire that also deserves a stand-alone review blog. This one, Happy Readers, is FIVE STAR… not counting the title!

It was originally published with the title A PLANET FOR TEXANS by Ace. It was one of their Ace Doubles back in 1958.

Here’s one blurb I managed to dig up, but I like mine better (see the review).

New Texas, the Lone Star Planet: its citizens figure that name about says it all. The Solar League ambassador to the Lone Star Planet has the unenviable task of convincing New Texans that a s’Srauff attack is imminent, and dangerous. Unfortunately it’s common knowledge that the s’Srauff are evolved from canine ancestors — and not a Texan alive is about to be scared of a talking dog! But unless he can get them to act, and fast, there won’t be a Texan alive, scared or otherwise! 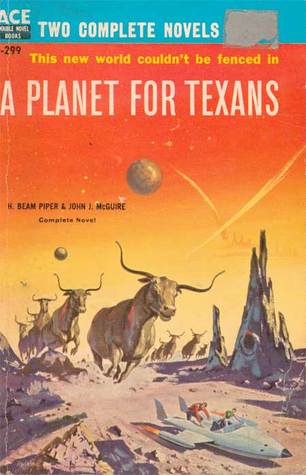 A real gem of a story hidden in obscurity. The blurb is also misleading in that the whole alien menace is just set dressing for the real story.

Here’s my version of a blurb: Things aren’t just Big on New Texas, they’re Super, including the complications! Ambassador Stephen Silk, tasked with bringing the planet of New Texas into the Solar League fold (by hook or by crook) has to learn to do things the New Texas way in a hurry, or he just might find himself six-feet under like his predecessor. With conspiracies on all sides (including his own) he must contrive a way to stop the aliens, annex the New Texans without a destructive fight, and save his own skin!

That about sums it up. The main point of interest for me was the political system of New Texas. If a citizen felt a politician had done something to infringe on the liberty of the people by overstepping the government’s job, then they could kill them. As long as a jury could be convinced that the killing was justified because of the politicians actions, it’s not even considered murder. Talk about keeping your elected officials on a short leash!

As I’ve seen with almost every Piper novel or story I’ve read, the idea of limiting governmental power and maintaining individual liberties are strong in them. I suppose that’s one of the reasons his writing resonates with me so much. That and the fact that they are always entertaining stories with definite defined characters, or course. Even the ones with little action and much intrigue are not too boring. This one is low on action, but the all-out full-force nature of the characters more than makes up for it.

I can highly recommend this one. I give it five stars and call it a Super Read!

View all my reviews

Hey! Happy Readers! Did you know you can…

If you like intrigue, humor and a bit of speculative technological supposition, you should pick up a copy of my technothriller-comedy eConscience Beta from Amazon today!

Peacekeeper Incorporated’s breakthrough nanotechnology could bring repeat offense crime to an end, freeing society from the need for criminal incarcerations. But first, they have to finish testing it. With funding on the line, and time to prove out the project getting short, the lead scientist must find a way speed things up. That’s unfortunate for his guinea pig, and anyone who would stand in his way.

Can the goal of ending most crime justify committing one… even a few?
And what happens when you conflate altruism with egotism?

Find out in eConscience Beta, where two lab techs and an uncouth petty criminal must outwit a brilliant but sociopathic scientist who’ll stop at nothing to establish his legacy as the man who ended crime.

If Science Fiction Space Adventure is more your speed, then you should check out my anthology, Horizons Unlimited: Volume 1.

Matter conversion technology—Matt-Con—has broadened the scope of mankind’s existence. It has opened up the real possibility of viable colonies on other planets in our solar system, and even space itself. Anywhere matter can be captured or energy from the sun can be felt, the possibility of expanding human habitation exists.

The space station Chariot of Helios—on its way to Mercury to become a power collection station for Earth’s growing need for energy to power matt-con tech—encounters a strange anomaly that threatens ship and crew.

The sudden destruction of mankind’s first atmospheric terraforming platform leaves three unlucky exonauts struggling to survive in the skies of Venus aboard a cobbled-together airship. Meanwhile, the commander of the space station above battles obstacles that might keep her from rescuing her stranded husband and crew in time.