LibertyCon 31 ended Sunday. Now I haz a sad. When you anticipate something for a year, then go do it for three whirlwind days (I swear there is a time-warp that speeds stuff up around this Con), you can experience a euphoric crash after you get home. It doesn’t last forever, but I do seem to have it happen every year. I just want more! It’s a drug, man!

The trip up to the ‘Noog was picture perfect. I didn’t even have to argue with the Google Maps app about wanting me to go the wrong way to I75. The hotel app let me do a pre-check-in the day before, so when I got there, they handed me my card and said enjoy your stay in about 2 minutes. The attendant schlepped my luggage upstairs (including my too many boxes of books) while I went an parked the truck. I took a photo of my slot so I would remember where I parked (not that it helped b/c slot 509 is on floor 6… ). Then off too the room… a very nice room. The Marriott is the best hotel I’ve stayed in in Chattanooga thus far.

I got to observe one session before my own schedule kicked in. I was highly entertained by the Black Tide Rising panel featuring John Ringo and friends. The tales of how the stories in the anthology came about were quite entertaining. The announcement that volume 2 is coming out in 2019 was also well received.

After that, it became super busy time! The reason is that I was attending as a PRO. Yep, I’m officially listed in a convention handout as a professional writer. Who’da thunk it!? 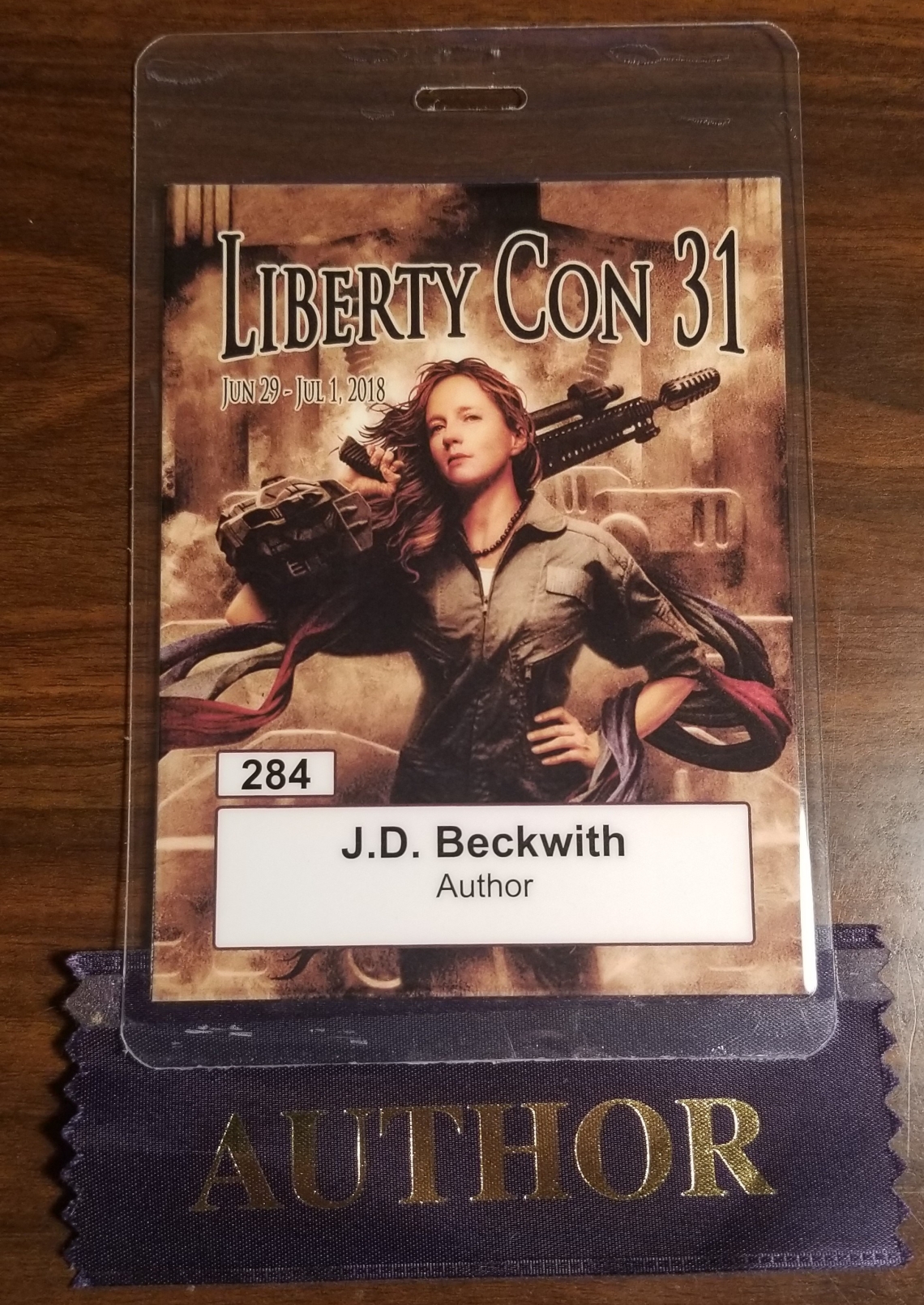 I got to try to sell books. ‘Try’ being the key word here. I had my spirit animal, Grumpy Cat, with me for good luck. It was awful. Didn’t sell a single book that time, but I think it was the fact that it was so early and people were still checking in and such. It did a bit better on Saturday & Sunday. I am not a salesperson. I hate marketing. This must change. Goals, I have ‘em.

Right after that I was on a Panel for the Superversive Planetary Anthology with a vast array of writing stars. 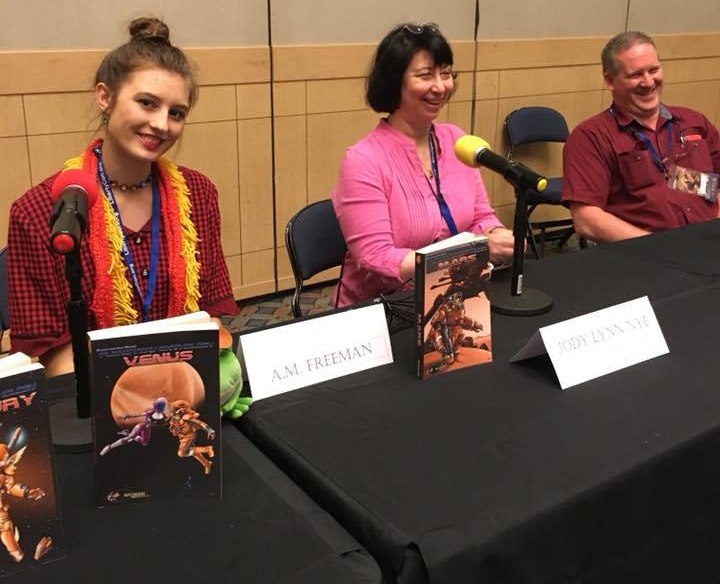 Yes, that’s correct; I was sitting next to Jody Lynn Nye. I watched her crochet something under the table while still remaining completely engaged in the conversation. It was all I could do to keep my elbows off the table (which was not always a successful endeavor). I have  discovered I’m a leaner (see above). Need to fix that. More goals.

Also, the ever-chipper April Freeman (left side of the above picture) and I finally realized that we both reside in the same county… AFTER we talked on Facebook a day after the convention closed. Folks, the world is small and full of tricks and shenanigans.

By the way, if you want to read some really amazing stories written by these folks, you need to grab a copy of the Planetary Anthologies. There are four out now, Mercury, Venus, Mars, and also the just released Earth. I have stories in Mercury, Venus & Earth.

After that, the official Opening Ceremonies commenced. We were highly entertained by an adaptation of ‘Brandy’ by the talented Gray Rinehart, followed by this year’s MC, Chuck Gannon who shared with us some rather curious theories of the ‘real reason for LibertyCon’.

Immediately after, I went on a book buying binge. I got autographs, some oldies from the Huckster’s room and then some generous soul dropped a load of free books on the table outside! I was like a really excited euphemistic analogy (think about that for a minute)! And then I took the heavy bag of books to the room and took a picture in really bad lighting! See! 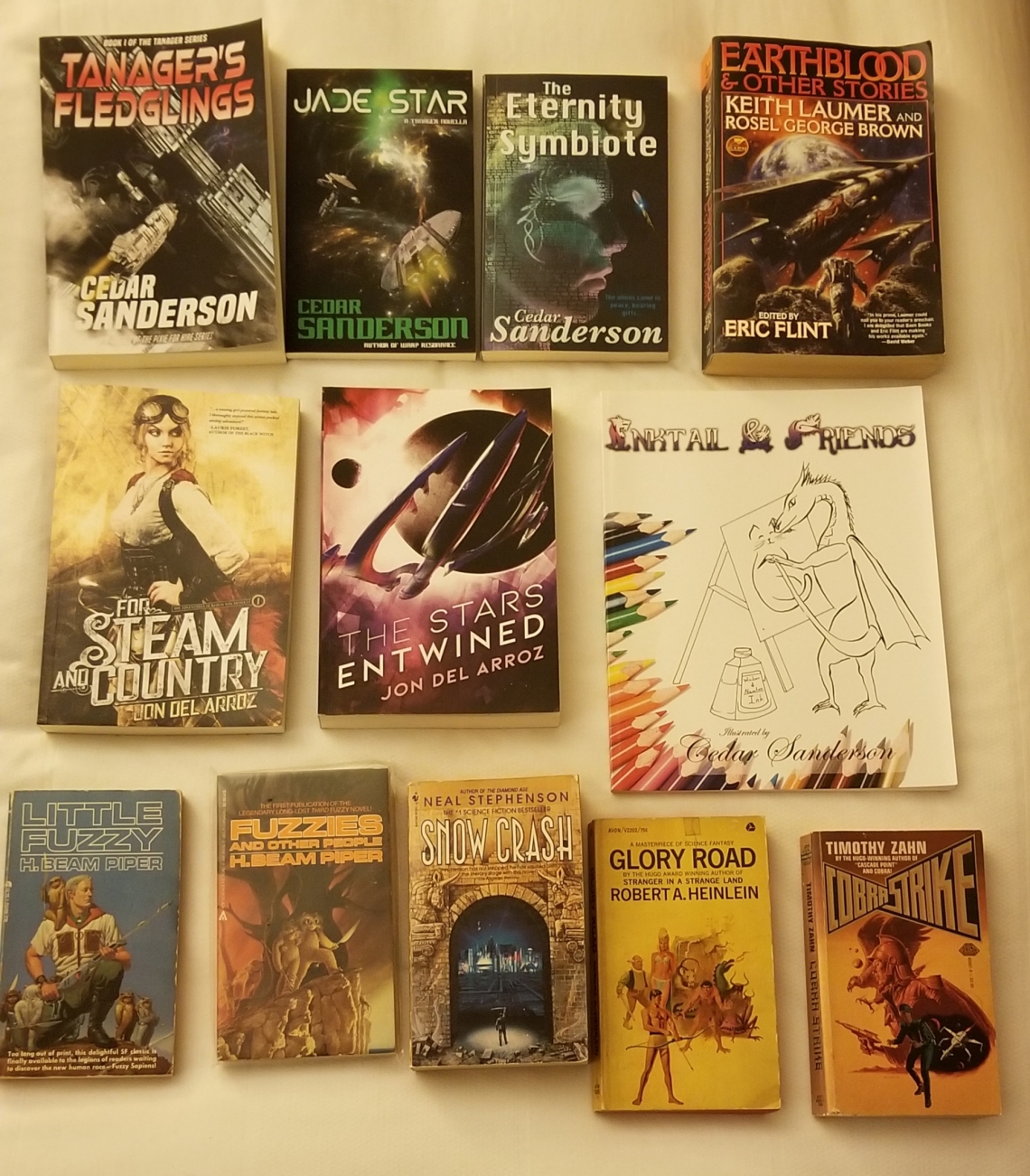 I did some posting and slide-show editing for my next Author’s Alley stint, then went down and tried to play some Call of Cthulhu, but was force to my bed by a headache before it got too interesting. Such is life.

Saturday was a blur. I went to several panels for Indie Authors. I got some good advice from others in the field on how to do things right, or at least how to avoid doing some things wrong. Then had another sales stint. Sold a few, but still not many. I’m not too worried about that though, because it all counts as experience. I’ll do better in the future.

Afterward, I made a trip to the Urban Stack, a local restaurant that serves some of the best food around, with a D&D buddy. We had an awesome meal together, and caught some interesting scenery on the way. Only at a Sci-Fi Convention will you find a tricked-out Zombie Response Vehicle with programmable Gatling gun outside your hotel door.

Late Saturday was the Mad Scientist Roundtable. I was invited to be a panelist, but I really felt out of place. The people on that stage are seriously in the realm of super-geniuses! As happens every time I attend one of the Mad Scientist events, I got smarter just by being in the room with these people.

Sunday was the Kaffeeklatch, where I got to meet and talk to some other authors, as well as some fans. I had a great run-down of the Taylor Hoch D&D session (which I didn’t get to go to b/c they were both during my sales times..arrrgh!) from one of the kiddos who got to play.  Right after was my 3rd and last Author’s Alley stint. It was my best sales day, but also a rush because I had to deal with check-out right after.

And now, I am seeing all the posts and pics on Facebook, realizing that even with the fun I had, there was still so much more going on that I missed! I’ll have to seriously consider if I want to try bookselling again next year or not.

Well, that’s about all I’ve got on this years LC adventures. It was a blast as usual!

Tickets for LC32 go on sale at 8AM July 4th. Get ’em while they’re available, because they will not last long! The location is going to be The Read House hotel next year, and rooms in the discount block will be available starting September 1st.