The blog has been silent for a while because… well, I’ve been busy. I have not had time to read a lot or write a review lately because… 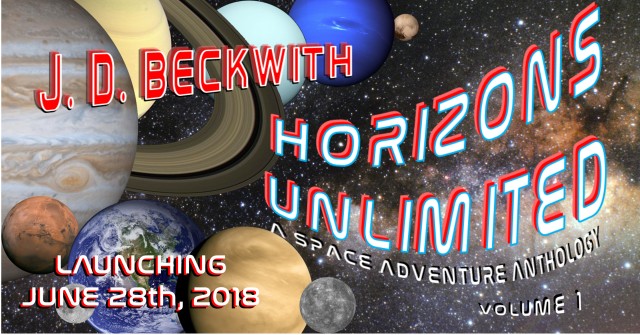 HORIZONS UNLIMITED
Matter conversion technology–Matt-Con–has broadened the scope of mankind’s existence. It has opened up the real possibility of viable colonies on other planets in our solar system, and even space itself. Anywhere matter can be captured or energy from the sun can be felt, the possibility of expanding human habitation exists.In this volume:
Quicksilver
The space station Chariot of Helios–on its way to Mercury to become a power collection station for Earth’s growing need for energy to power matt-con tech–encounters a strange anomaly that threatens ship and crew.
Escaping Aurora
The sudden destruction of mankind’s first atmospheric terraforming platform leaves three unlucky exonauts struggling to survive in the skies of Venus aboard a cobbled-together airship. Meanwhile, the commander of the space station above battles obstacles that might keep her from rescuing her stranded husband and crew in time.

In preparation for this, I have spent a lot of time learning to use Gimp 2 to design my own cover, bookmarks and other sundry media/ad items. There has been a steep curve to the software, but I’m getting there. It’s a great free resource that’s well worth taking the time to learn.

Here’s the Facebook Cover Photo I came up with.

Here are my bookmarks, which will be available for LibertyCon during my launch window.

And last, but not least (first, actually), the book cover itself.

The new book will be officially released in ebook format on June 28th, and I’m trying generate interest in advance so that everyone who wants a copy can help boost me up in Amazon rank by buying it on the same day.

I would greatly appreciate your help spreading the word to others who might like these types of stories.

If you just can’t wait, though, you can snag a copy of the paperback version on Amazon right now.

As for the blog, I do have  a book review coming up for the latest in the Frontiers Saga, but I don’t think I’ll get to it tonight.

In the mean time, enjoy this picture of my duck, Harley and her new hatchling!