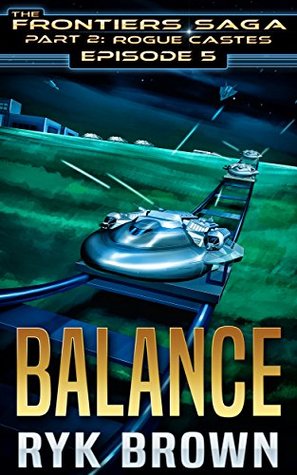 Balance is a decent continuation of The Frontiers Saga Rogue Castes, but it is what I would call a ‘filler novel’. Sure, parts of it were necessary because they build the story up and introduce some new characters.

Unfortunately, it’s a slow read for the most part. The ending is great, which is typical of these books; however, the plot suffered from a bit too much foreshadowing, and a lot of extraneous information was dumped in regarding the details of how to program some of the tech. The entire trip to Earth could have been done much easier and without all the boring details of the trip. All of that just served to make the book tedious and longer that it had to be. Honesty, I think it could have been compacted with whatever is coming next to make a much more exciting read out of it.

There are some new characters that are introduced, and some expanded, that I just do not care about yet. Maybe they will be important later, but right now they are boring to watch. On the other hand, some of the newest were boring to start with, but ended up being kind of cool at the end.

It’s hard to write hit after hit, and this series has had it’s share, so one that’s not a chart topper is not going to make me stop reading the it by any stretch. So, I will give this one a 3 star rating and call it an Average Read. I look forward to the next one in the series.

View all my reviews